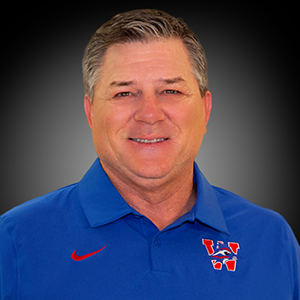 Coach Todd Dodge is entering his 35th year of coaching, 21 of those years as a Head Football Coach. He currently serves as Head Football Coach and Athletic Director of Austin Westlake High School - home of Drew Brees, Nick Foles and Justin Tucker.

Coach Dodge discovered his passion for the game early on in high school in Port Arthur, Texas. In 1980, Todd became the first high school quarterback in history to pass for over 3,000 yards. As a senior, he threw 3,564 yards and 40 touchdowns in his 1980 State Finalist season at Port Arthur. Dodge was a two-time AP All-State & Player of the Year and as a senior, was selected to the Parade All-American Team. In 2001, he was inducted into the Port Arthur Yellow Jacket Hall of Fame.

As quarterback for the University of Texas at Austin, Coach Dodge started 23 games and notched a 19-4 record from 1983 to 1985. He began his coaching career immediately after graduation. In 2004, he was named Head Coach for the Texas High School Coaches Association (THSCA) North All-Stars. In 2006, he was the Offensive Coordinator for the Army All-American game, and in 2007 he served as the Head Coach for the Army All-American game.

Coach Dodge has coached nine quarterbacks who have been named Texas State Offensive Players of the Year, while four have also been named Parade All-American.

Coach Dodge is married to Elizabeth Neptune Dodge. He has two children - a son, Riley, who currently serves as Southlake Carroll’s Head Football Coach and is married to Alexis, and a daughter, Molly, married to Weston Kuenstler. Todd and Elizabeth are proud grandparents of Tate Riley (5), Landry Mac (2) and beautiful newborn, Blakely